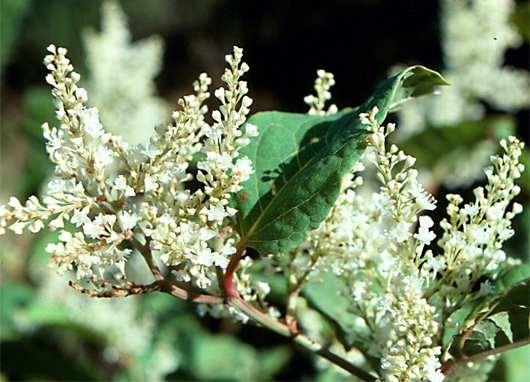 What is resveratrol good for?
Resveratrol is a stilbenoid, a natural phenol, and a phytoalexin created naturally by numerous plants when under attack by pathogens. Studies have shown resveratrol can help with:

What foods are high in Resveratrol?
The skins of grapes include high levels of resveratrol. The beneficial attributes associated with drinking red wine have become well known. The Japanese Knotweed (pictured above) is also very high in resveratrol and is commonly used for commercial Resveratrol products.
Berries like Bilberries and blueberries are very good sources of resveratrol as are most purple foods including purple onions, purple cabbage and blackberries.

Grapes and Knotweed contain the highest amount of Resveratrol. The Japanese Knotweed is commonly used for commercial Resveratrol products. It is the roots of the knotweed, from which it is extracted.

The Resveratrol in these plants is used to protect against pathogens, viruses and ultraviolet radiation; much like antioxidants. Resveratrol has been associated with a host of health benefits. I will mention just a few here.

In 2006, Italian scientists obtained the first positive result of resveratrol supplementation in a vertebrate. Using a short-lived fish, Nothobranchius furzeri, with a median life span of nine weeks. They found a maximal dose of resveratrol increased the median lifespan by 56%.

A study published in 2013 in the journal Science demonstrated that there is an explicit link between resveratrol and sirtiuns; that an anti-aging protein in humans could be activated by resveratrol, at least in vitro and under certain experimental conditions.

Resveratrol can mimic a calorie-restricted diet, contributing benefits for both longevity and weight reduction. Restricting calories, but not nutrients, is part of the CRON (Calorie Restriction with Optimal Nutrition) program that is used to extend lifespan. Resveratrol has been revealed to trigger a gene called SIRT1 which increases energy product in the mitochondria, our cellular energy factory. We may see benefits for conditions of fatigue.

March 7, 2013 A study demonstrates what researchers consider conclusive evidence that the resveratrol directly activates a protein that supports health and longevity in animal models. What’s more, the researchers have uncovered the molecular mechanism for this interaction, and show that a class of more potent drugs currently in clinical trials act in a similar fashion. Pharmaceutical compounds similar to resveratrol may potentially treat and prevent diseases related to aging in people, the authors contend. Read more here

Cancer
Resveratrol may be an anti-cancer agent. It can help to prevent the initiation and progression of cancer by inhibiting

abnormal cell proliferation. It can also restrict blood flow to tumors and promote the death of unhealthy, cancerous cells, preventing their proliferation. Researchers at the Rochester University revealed for the first time that Resveratrol can help to destroy pancreatic cancer cells by getting to the cell’s mitochondria, and crippling its function. The study is seen in the March edition of the journal.

An important study to consider; Resveratrol treatment appeared to prevent the development of mammary tumors in animal models; however, it had no effect on the growth of existing tumors. Paradoxically, treatment of prepubertal mice with high doses of resveratrol enhanced formation of tumors. Injected in high doses into mice, resveratrol slowed the growth of neuroblastomas.

Resveratrol prevents the expression of inflammatory signals in the body. Resveratrol can decrease the inflammation response by obstructing pathways that allow inflammation to occur.

Bioavailability
There’s been much concern over the years in regard to resveratrol’s bioavailability. Much data has demonstrated that resveratrol gets destroyed by digestion before it can be utilized by the body. However, scientifically this is untrue. Bioavailability is resveratrol’s ability to make it past the liver’s detoxification.

Resveratrol is viewed as a stressor by the liver and as such is made more complex molecularly to be more controlled. However, the resulting liver’s metabolites of resveratrol have been demonstrated to be just as biologically active if not more active than the unaltered resveratrol.

Taking quercetin or piperine with resveratrol will allow more passes through the liver before it is finally metabolized and thus facilitates more immediately available resveratrol, but eventually it is all metabolized in the liver.

Many brands of resveratrol already provide these added nutrients to increase immediate availability
Additionally, micronized resveratrol has been seen to increase blood concentrations.

Resveratrol is definitely one of the big ones; considering all that it can do. That fact that it triggers SIRT1 is worth the price of admission. Supplementation is clearly the way to go in seeking full benefits. However, although resveratrol’s ORAC score is very high, its bioavailability is argued to be low; which means, when taken orally, it may not be absorbed as much as desired.

There are many out there trying to figure out ways of improving absorbability for resveratrol. Some are developing emulsion blends while others are experimenting with more creative ideas, including laxatives. It seems currently, Lecithin taken with resveratrol helps improve absorbability. Even Ray Kurzweil recommends taking resveratrol with lecithin. As stated above Piperine and Quercetin may also help with absorption. There is much talk on the Interwebs on this subject. Nothing at this time has been studied enough to show absolute proof of anything. All can be dangerous, believe no one. Proceed at your own risk, look both ways before crossing.